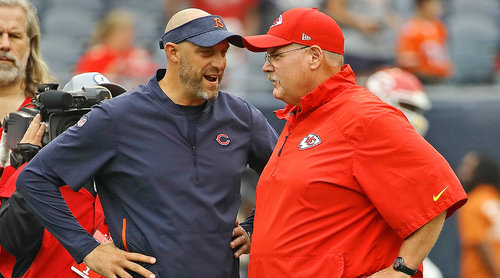 Creating a Leadership Legacy: A Coaching Lesson From the NFL

Developing a Chief of Staff, Employers

Every executive has an opinion on how to create the leaders of the future while sustaining their own growth and innovation. With the Super Bowl quickly approaching, we can take a break from the crushing disappointment of our favorite team’s performance to glean lessons in success, leadership, and mentoring from the sport of football.

In business, it’s the Executive and Chief of Staff. In the NFL, it’s the Head Coach and Assistant Coach. In the organization of football, there is one executive, in particular, we are interested in studying: Kansas City Head Coach Andrew (“Andy”) Reid, along with those individuals he’s developed from Assistants to Head Coaches.

We traditionally think of the best NFL coaches as those with the most wins and championship rings, but Andy Reid has never won the coveted Super Bowl championship. His Kansas City Chiefs fell short of reaching the Big Game just this past weekend against the New England Patriots. Nevertheless, one might argue the pinnacle of coaching success is not only winning but creating your strongest competition ­– an elite group of other winners who elevate the sport. This, Andy Reid has demonstrated throughout his career.

Andy Reid’s impact on the NFL is difficult to ignore. Ten of Reid’s assistant coaches have gone on to become Head Coaches. Six of them are currently head coaching, and in addition to Reid and his Kansas City Chiefs, three were also found in the 2019 Playoff Bracket:

The other current Head Coaches who were once his Assistant Coaches are:

From the perspective of an executive, does it make sense to create future executives, and sometimes your own competition, from a second-in-command position like the Chief of Staff? We think there is a very solid argument pointing to “yes.”

Of course, not all Chiefs want to become the CEO. In addition, not every CEO is going to be like Andy Reid. However, if we consider the benefits to our organizations and on leadership, it is difficult to ignore that grooming leaders:

The article also quoted Reid saying of his Assistant Coaches, “I want them all to be head coaches.” There are only 32 NFL teams, but imagine if only a fraction of today’s leaders of the world’s millions of organizations adopted the Andrew Reid mentoring strategy of growing their second in command. We would see exponential growth of hundreds or even thousands of Chiefs of Staff leading our organizations, families, and government into a better, more successful future.